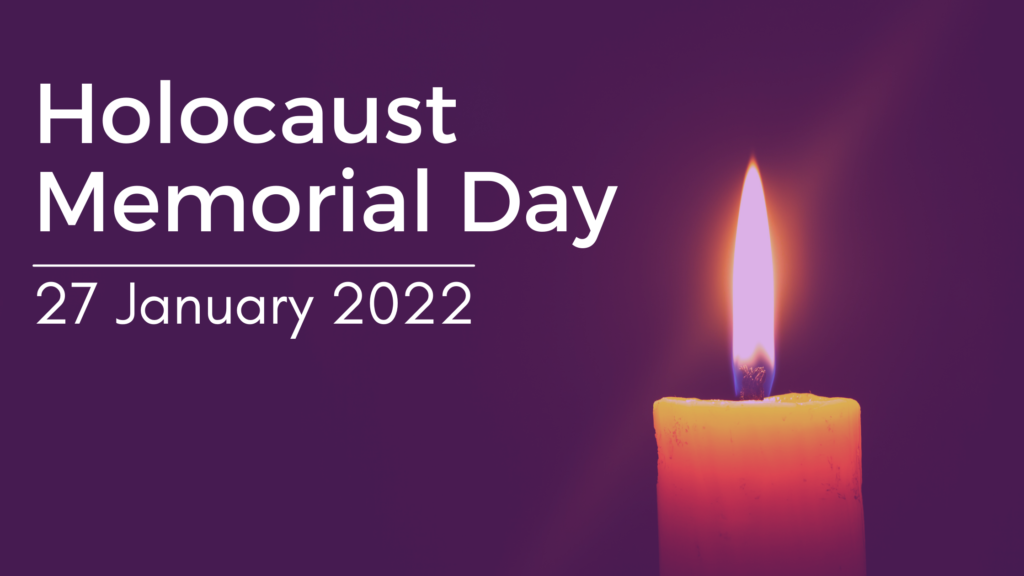 On Holocaust Memorial Day we remember all the lives lost and the lives changed in the Holocaust under Nazi persecution, and other subsequent genocides. Six million Jews were murdered alongside millions of other people that were under Nazi persecution. 27th January is a day of remembrance and a day of reflection of the lessons we can learn and actions we must take against hate and prejudice.

This year’s theme is ‘One Day’, there are many ways to interpret this theme. For Stop Hate UK, the theme of ‘One Day’ reflects our charity’s vision: ‘A world which is free from hate, harassment and discrimination’.

Hate, harassment, discrimination that is left unchecked and unchallenged leads to persecution and horrific events like the Holocaust and the genocides that followed in Cambodia, Rwanda, Bosnia, and Darfur.

People who are affected by Hate Crimes are just trying to make it through the day. Stop Hate UK pledges to challenge Hate in all its forms until One Day, no one has to face Hate Crimes and we can all experience a world free from hate, harassment, discrimination.

On July 14th, 1933, the Nazi leadership passed a law demanding sterilisation for people with inherited disabilities in Germany and began to spread messages that described the supposed economically harmful effects of disabled people on society. This developed into the horrific ‘mercy killing’ of disabled people, as well as an estimated 250,000 children and adults being imprisoned, experimented on and killed between 1933 and the end of the war.

On June 28th, 1935, the Nazi leadership in Germany revised the criminal code to allow for much stronger penalties and punishments for homosexuality than had been the case before. Gay men, and, later, lesbians, were incarcerated and subjected to horrific conditions and medical experimentation. Life changed for LGBTQIA+ people in all the lands where the Nazis held power, and even afterwards they were not recognised as victims of the Holocaust until decades later. About 15,000 gay people were deported and killed in the Holocaust.

On Dec 8th, 1938, Nazi persecution of Roma and Sinti people became racist law in Germany, and state-led persecution of these communities had been growing throughout the 1930’s because they were not seen as meeting the ideal of the ‘Aryan German’. Of the 23,000 who were sent to Auschwitz, only 2000 survived. In all, more than one third of Europe’s Roma community perished at the hands of the Nazis in the Holocaust at the many different camps and during waves of typhus in the ghettoes that they were forced to live in.

Sadly, prejudice against Jews, disabled people, LGBTQIA+ community and other communities still persists today and harms the lives of many people. The Holocaust and all other genocides must have a permanent place in our collective memory so that we learn from the past and take action against prejudice, discrimination, and Hate.

If you are targeted by prejudice and hate, you can reach out to Stop Hate UK to get guidance on support and reporting.

If you are planning to organise an activity for Holocaust Memorial Day in your community, you can use the resource below.

To mark Holocaust Memorial Day and preserve the memory of those who were murdered in the Holocaust, everyone can read one of the following pledges during your activity. 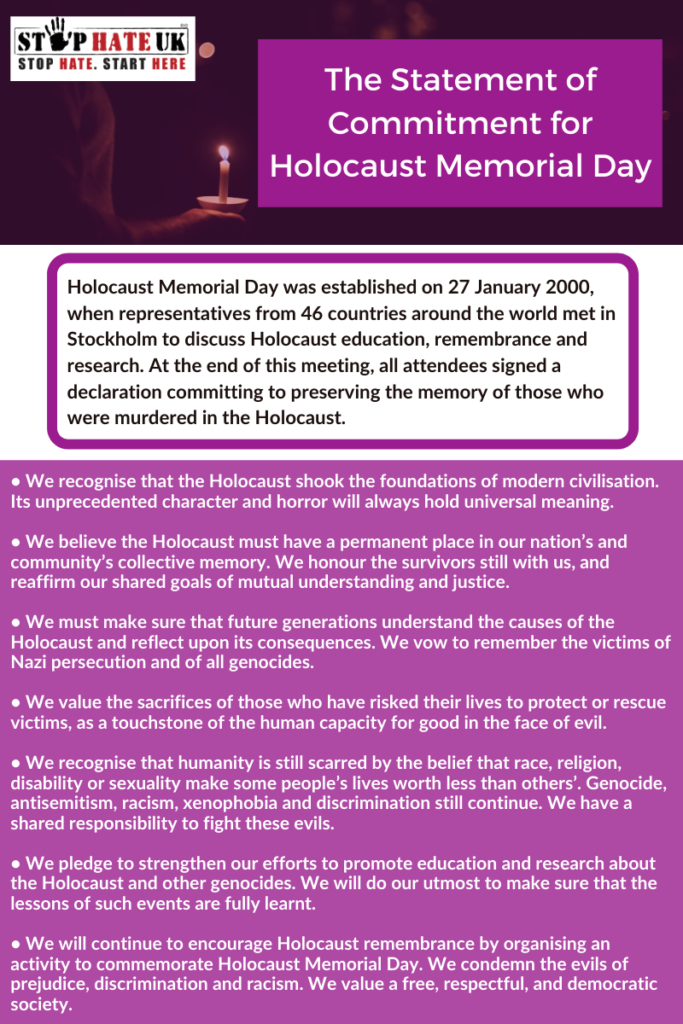